What follows is a subset of design patterns from Christopher Alexander's "A Pattern Language" that I found most compelling while thinking about single family homes.

Buildings must always be built on those parts of the land which are in the worst condition, not the best.

Outdoor space should be oriented southward to maximize sun exposure.

Do not place the garden fully in front of the house, nor fully to the back. Instead, place it in some kind of half-way position, side-by-side with the house, in a position which is half hidden from the street, and half exposed. 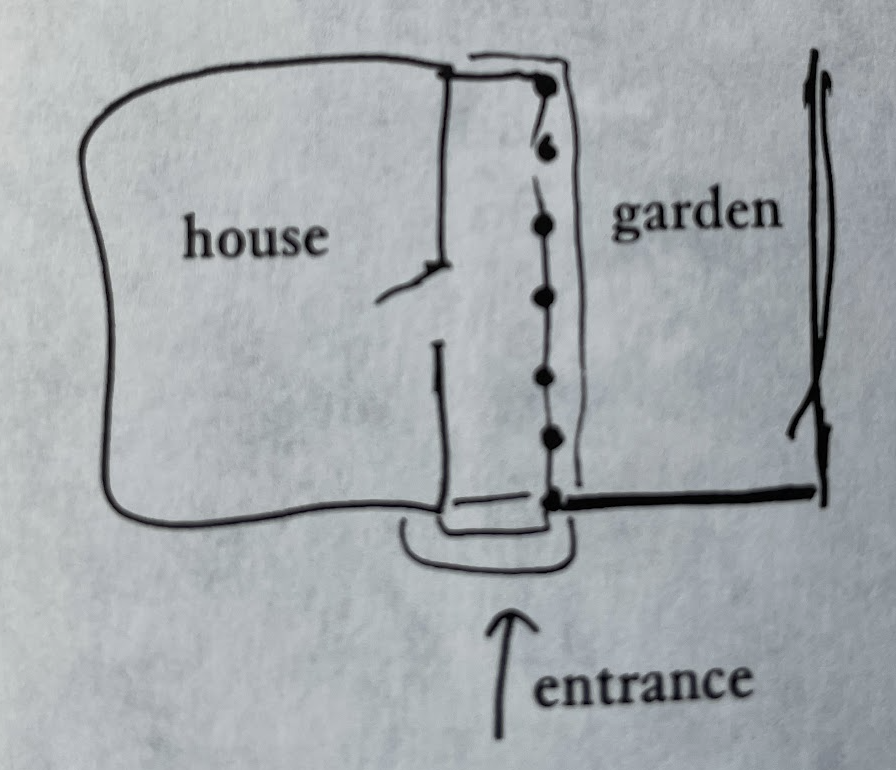 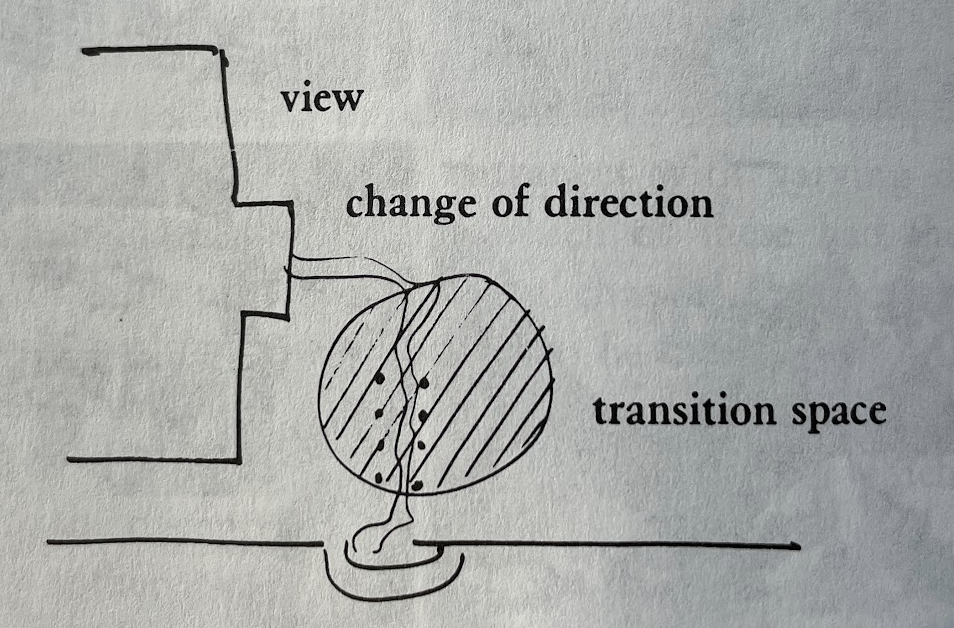 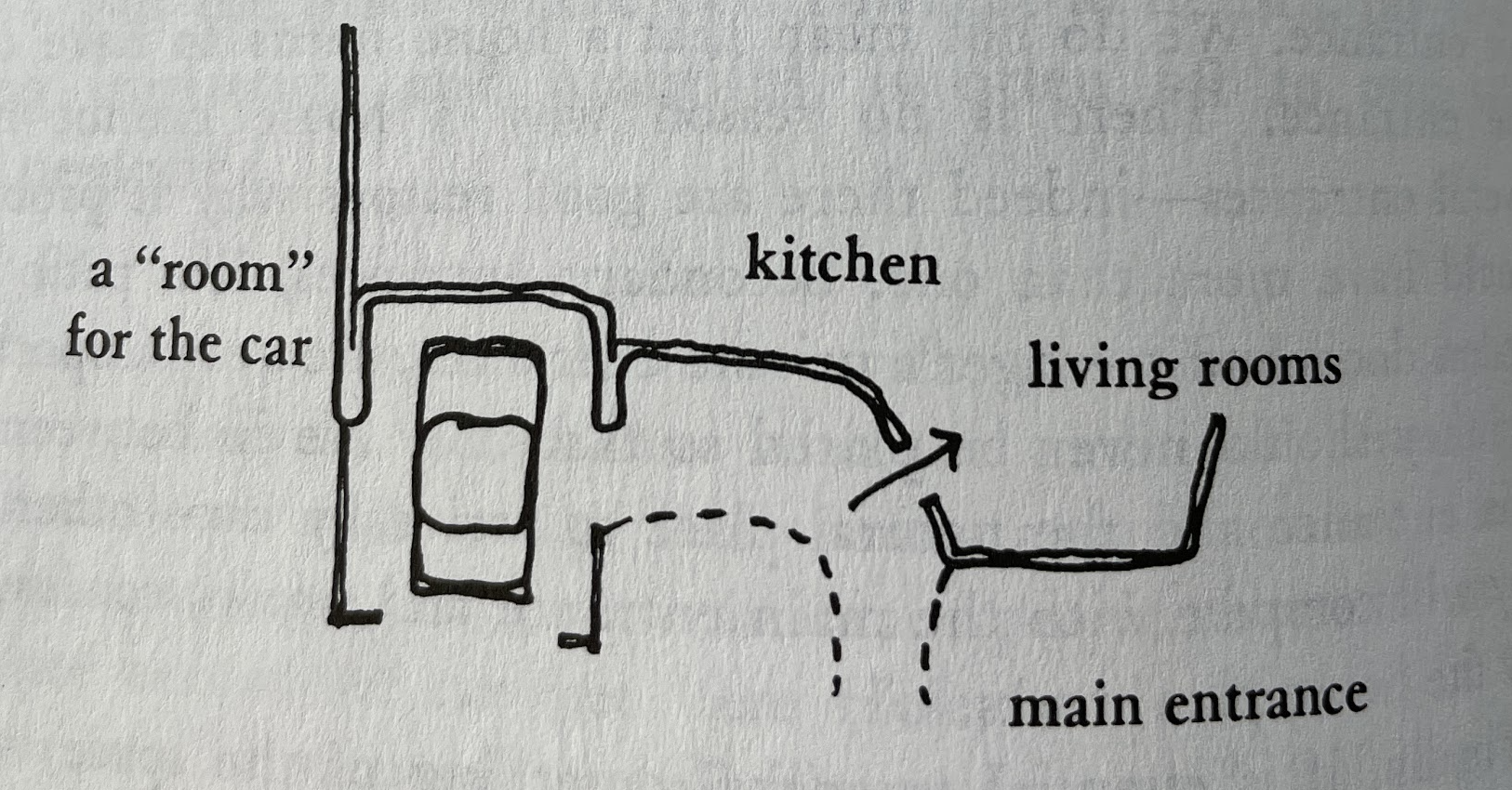 Visualize the whole building as a system of roofs. Place the largest, highest, and widest roofs over those parts of the building which are the most significant.

Bring the eaves of the roof down low, as low as 6'6" at places like the entrance. Build the top story of each wing so that the roof not only covers it, but surrounds it. A staircase is not just a way of getting from one floor to another. They provide special places to sit, a place where someone can make a graceful or dramatic entrance, a place from which to speak, etc.

(This is often impossible unless you are on an N-S oriented street.)

At the main entrance to a building, make a light-filled room which marks the entrance and straddles the boundary between indoors and outdoors, covering some space outdoors and some space indoors. The outside part may be like an old-fashioned porch; the inside like a hall or sitting room.

Keep passages short. Make them as much like rooms as possible, with carpets or wood on the floor, furniture, bookshelves, beautiful windows.

If there is a beautiful view, don't spoil it by building huge windows that gape incessantly at it. 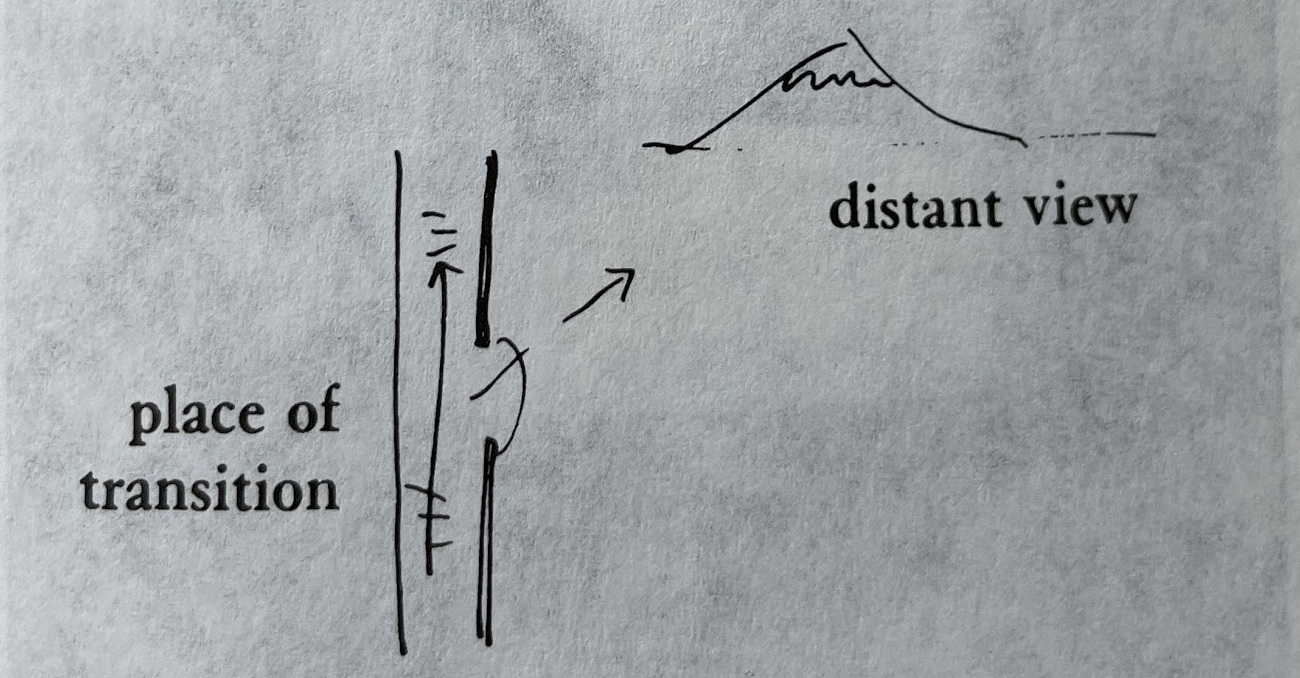 Give those parts of the house where people sleep an easter orientation, so that they wake up with the sun. This means the sleeping quarters should be on the east, but can also be on the west if there's a courtyard or terrace to the east.

Make the kitchen large enough to hold a good big table and chairs, some soft and some hard, and make it a bright and comfortable room. 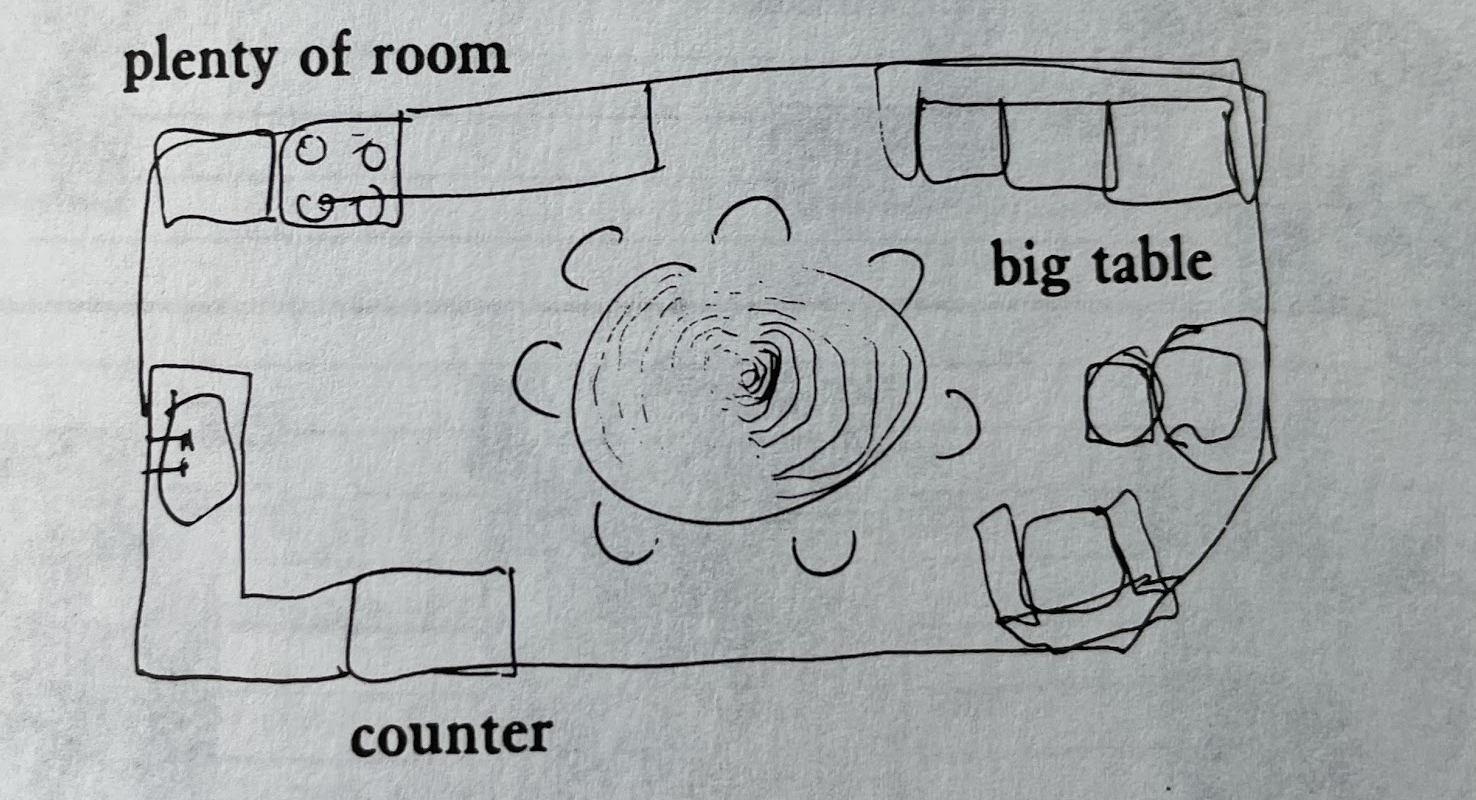 Give each member of the family a room of his own, especially adults. A minimum room of one's own is an alcove with desk, shelves, and curtain. The maximum is a cottage, like a teenager's cottage or an old age cottage.

Locate each room so that it has outdoor space outside it on at least two sides, and then place windows in these outdoor walls so that natural light falls into every room from more than one direction. 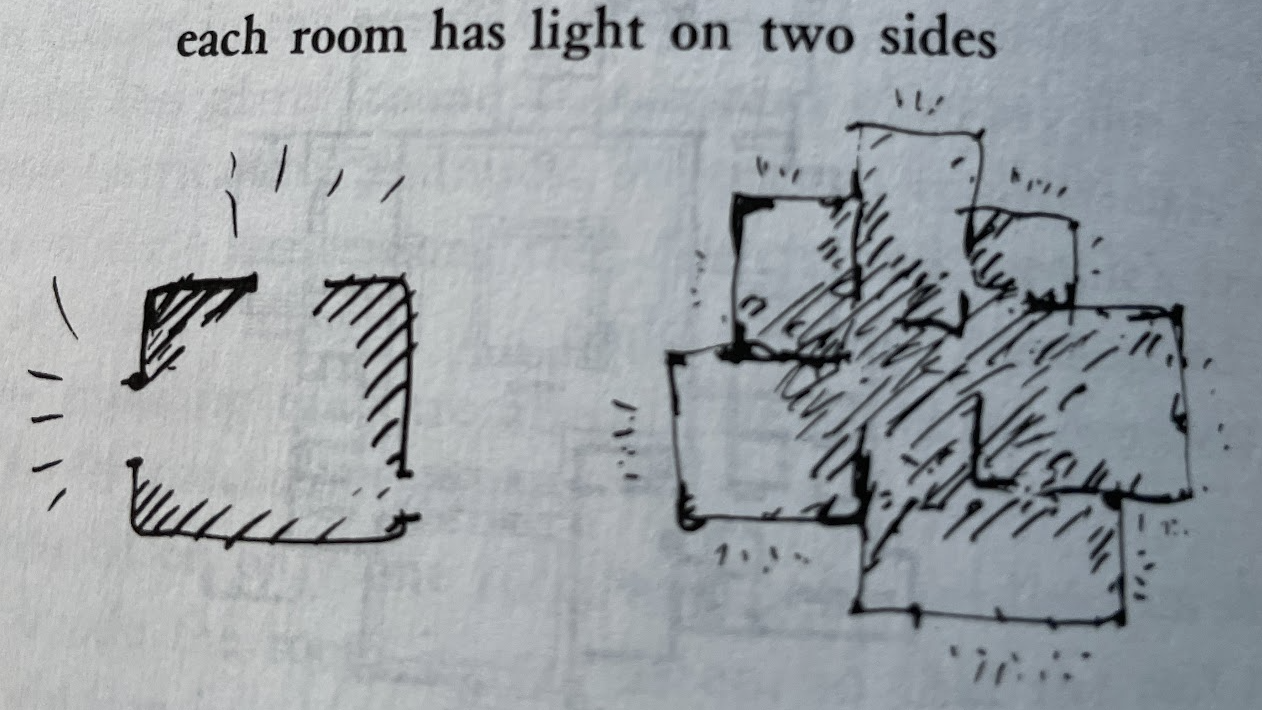 Make the north face of the building a cascade which slopes down to the ground, so that the sun which normally casts a long shadow to the north strikes the ground immediately beside the building. 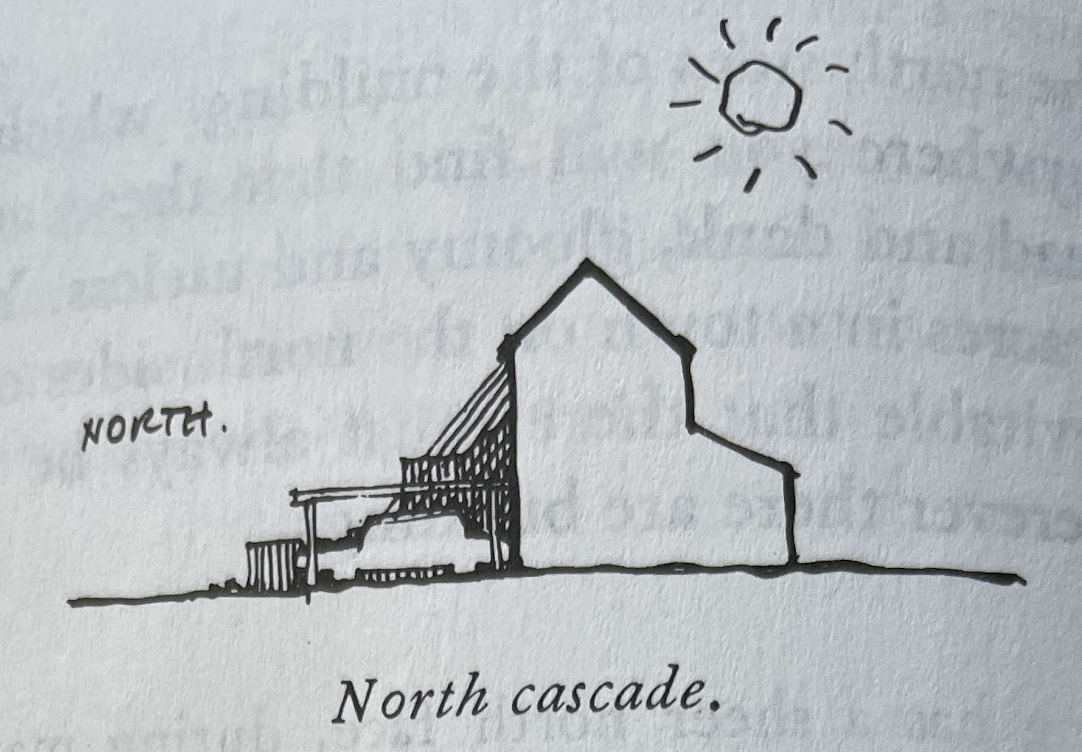 Whenever you build a balcony, a porch, a gallery, or a terrace always make it at least six feet deep. If possible, recess at least a part of it into the building so that it is not cantilevered out and separated from the building by a simple line, and enclose it partially.

In every room where you spend any length of time during the day, make at least one window into a "window place". 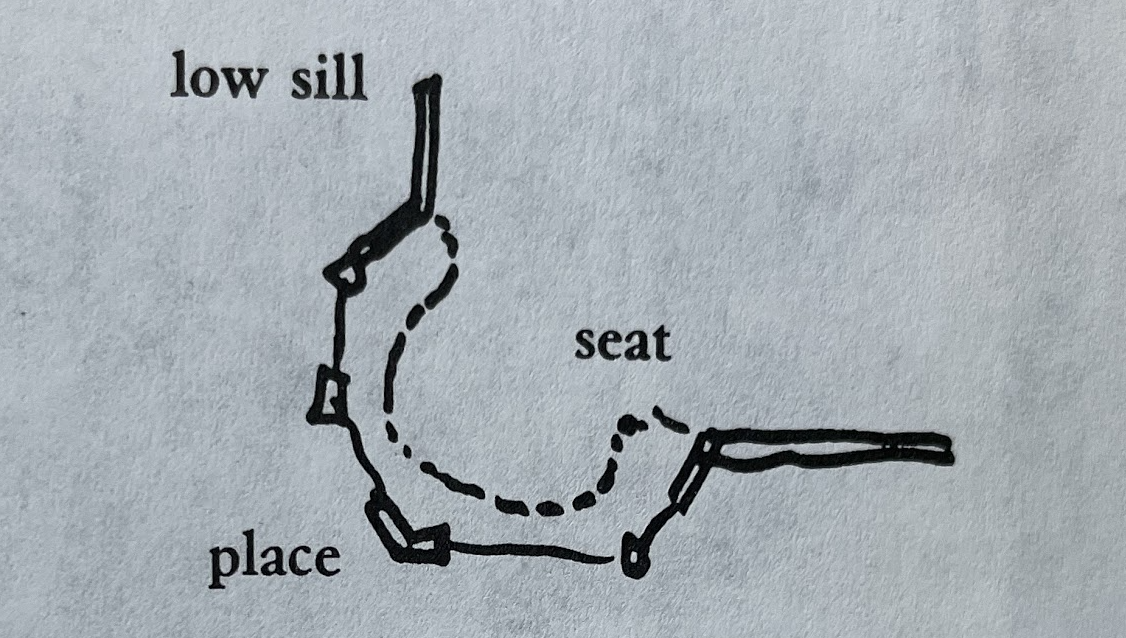 Vary the ceiling heights continuously throughout the building, especially between rooms which open into each other, so that the relative intimacy of different spaces can be felt.

Except in very large rooms, a door only rarely makes sense in the middle of a wall. 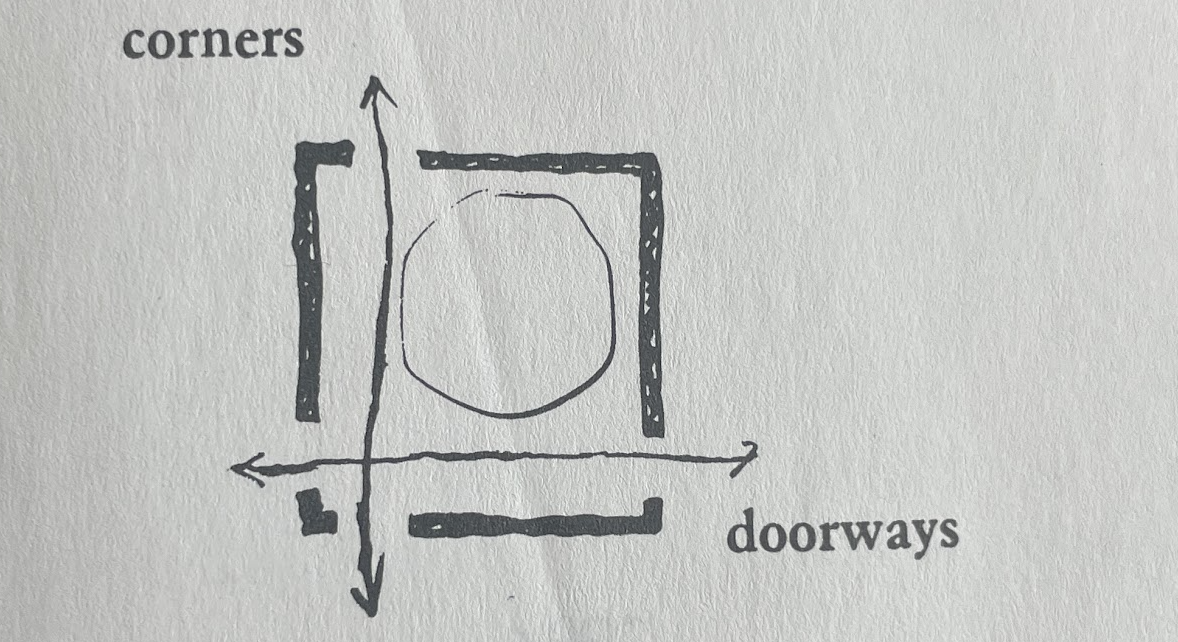 Place the closet themselves on those interior walls which lie between two rooms and between rooms and passages where you need acoustic insulation. Place them so as to create transition spaces for the doors into the rooms. On no occasions put closets on exterior walls. 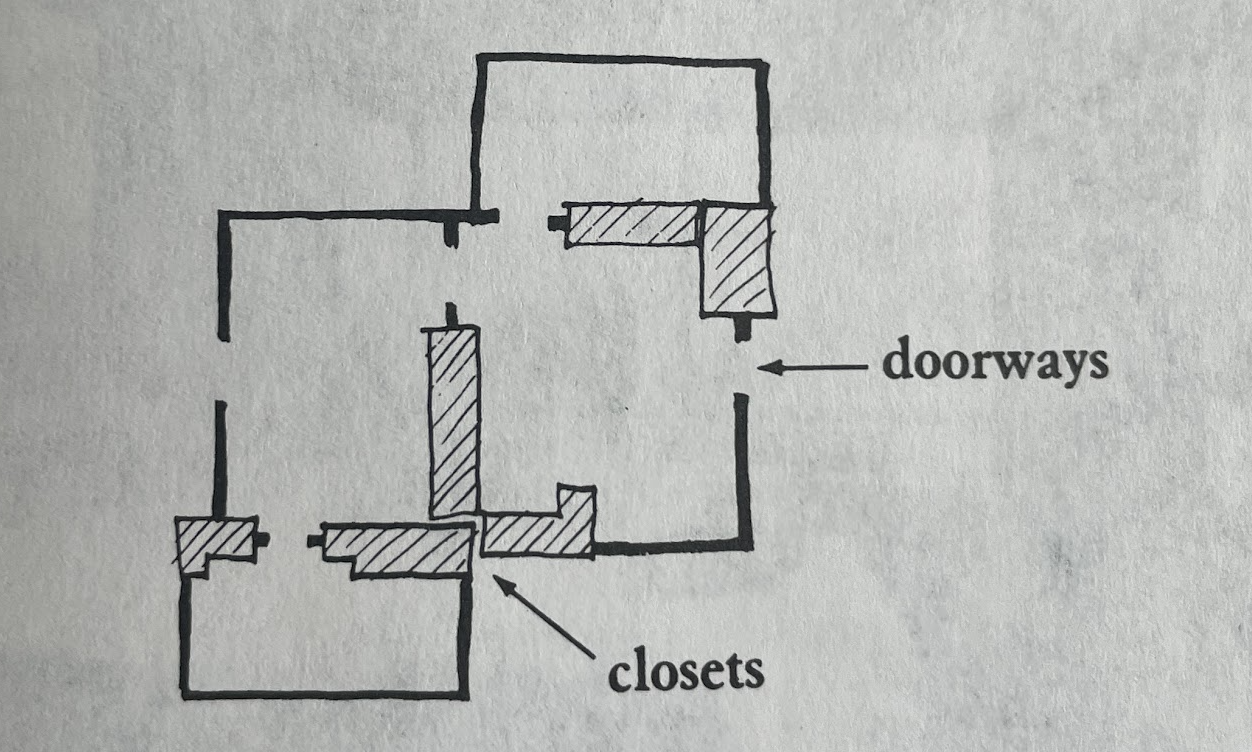 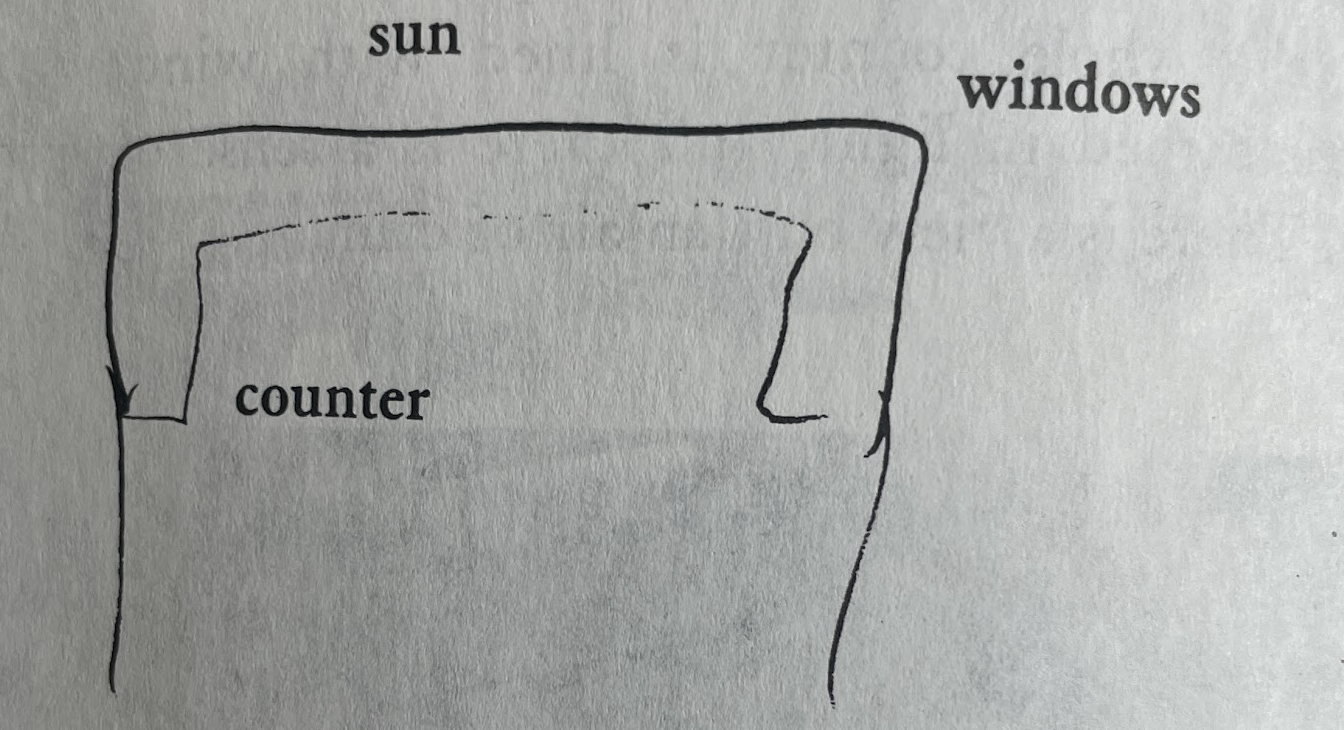 Wherever children play, make small "caves" for them. Tuck these caves away in natural left over spaces, under stairs. Keep the ceiling heights low — 3-4ft, and the entrance tiny.